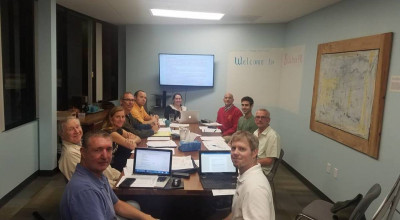 The meeting was called to order by Chair Brad Richardson at 7:10 pm in the clubhouse at 13056 Alpine Drive, Poway.

ESTABLISHMENT OF A QUORUM

The Chair announced that there was a quorum present with the following members present:

Without objection, the resignation of Colleen Guerrero as Secretary was added to the end of the agenda.

He noted that he still has not received the Annual Meeting Committee’s documentation for the February 2019 in-kind contribution that has to be reported to the California Secretary of State.

The members discussed with Antonio questions that he had regarding what the Executive Committee wanted from him so that the proposed plan could move forward.  Such a plan would require significant time, effort and financial resources of the committee.  The committee

members would want from him a comprehensive outline of how the program would function, how much money would be raised at each stage, as well as a timeline for its operation before the Executive Committee could commit to such an obligation.  It was noted that with the upcoming Annual Meeting in February 2020, this plan would need to be undertaken after that event.

The committee continued its review of the sample boilerplate bylaws provided by the state party, discussing suggested changes to Articles VIII-XI.  Without objection, point person Bob Fraas would incorporate those changes, as well as re-format the entire document for the committee to review & take final action on the draft at the October meeting, so that it can be prepared for distribution to the entire central committee membership for their comment and feedback.

Chair Brad Richardson presented a proposed budget on behalf of the Annual Convention Committee chair Don DeAngelo calling for a 5-hour event similar to this past February’s event.  Following discussion of the Green Dragon’s proposed event contract costs, Bob Fraas proposed a 3-hour event in order to control costs and keep the banquet price from rising to $85 per person.  He had developed a budget worksheet that would keep the cost at $65 per person and break even at approximately 60 paid tickets, the approximate attendance at the February 2019 event.  Following discussion, it was moved seconded, and unanimously carried to authorize Treasurer Bob Fraas to provide a copy of his budget worksheet proposal (via Slack) for tentative committee approval, then further authorize him to obtain a revised banquet contract from the Green Dragon Tavern, as well as obtain a cost list of buffet choices, all for committee final approval at the October meeting.

On a motion mad and seconded, and unanimously carried, Joe DePaul would prepare a tentative, 3-hour-based program agenda for the committee’s review at the October meeting.

Without objection, the Annual Convention Committee was instructed to prepare a calendar timetable of deadline leading up to the convention.

Bob Fraas asked if there was a better way of keeping the website event schedule (i.e. supper club announcements) up-to-date than continuing to lay the burden on Chair Brad Richardson.  After discussion, and without objection, Joe DePaul volunteered his Publicity Committee to handle that function; he would also assume the temporary duty of acting newsletter editor (a function that had been done by Secretary Colleen Guerrero).

Central Committee member Joe Shea inquired as to how the “Statement of Principles” on the party’s webpage was arrived at and suggested that it should be developed with input from the membership.  Brad Richardson & Joe DePaul replied that it was hashed out through lengthy discussions among the active members several years ago.  Joe Shea withdrew his suggestion.

Central Committee member Joe Shea stated that the Supper Club announcements were confusing & not consistent from platform to platform.  Following discussion, and without objection, PR Committee Chair Joe Shea would assume the duty of newsletter editor, as well as take responsibility for seeing that the website events calendar is kept up to date.  This would help provide consistent information.  The SDLP can do nothing about other platforms run by independent parties.

Central Committee member Joe Shea suggested that the newsletter have some policies set to guide the newsletter editor.  Following discussion, and without objection, PR Committee Chair Joe DePaul and Joe Shea would look into this and report their suggestions to the Executive Committee.

Chair Brad Richardson reported that he received notice from Colleen Guerrero that she was resigning as secretary due lack of time and to other obligations.  Without objection, Colleen’s resignation was accepted and a vacancy declared.  A thank you to Colleen, notice of the vacancy, and a request for volunteers (to contact Brad via the website) would be placed in the October newsletter.

There being no further business to come before the Executive Committee, the Chair declared the meeting adjourned at 8:45 pm.